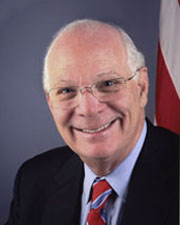 a Senator and a Representative from Maryland; born in Baltimore, Md., October 5, 1943; attended public schools; graduated from Baltimore City College, Baltimore, Md., 1961; B.A., University of Pittsburgh, Pittsburgh, Pa., 1964; J.D., University of Maryland, Baltimore, Md., 1967; lawyer, private practice; member of the Maryland state house of delegates, 1966-1986, speaker, 1979-1986; elected as a Democrat to the One Hundredth and to the nine succeeding Congresses (January 3, 1987-January 3, 2007); one of the managers appointed by the House of Representatives in 1989 to conduct the impeachment proceedings against Walter L. Nixon, judge of the United States District Court for the District Court of Mississippi; not a candidate for reelection to the House of Representatives but was elected as a Democrat to the United States Senate in 2006 for the term commencing January 3, 2007; reelected in 2012, and again in 2018 for the term ending January 3, 2025.

A resolution promoting minority health awareness and supporting the goals and ideals of National Minority Health Month in April 2019, which include bringing attention to the health disparities faced by minority populations of the United States such as American Indians, Alaska Natives, Asian Americans, African Americans, Hispanics, and Native Hawaiians or other Pacific Islanders.
Health
This resolution expresses support for National Minority Health Month in April 2019.

A bill to amend the Internal Revenue Code of 1986 to modify nondiscrimination rules to protect older, longer service participants in retirement plans.
Taxation

A bill to eliminate racial, religious, and other discriminatory profiling by law enforcement, and for other purposes.
Crime and Law Enforcement

A bill to establish an Office of Emerging Markets within the Small Business Administration that will strengthen the development of small business concerns in emerging markets, including those owned by women, minorities, veterans, and those located in rural areas, and for other purposes.
Commerce

A resolution calling on the Government of Cameroon and armed separatist groups to respect the human rights of all Cameroonian citizens, to end all violence, and to pursue an inclusive dialogue to resolve the conflict in the Northwest and Southwest regions.
International Affairs

A bill to amend the Water Resources Research Act of 1984 to reauthorize grants for and require applied water supply research regarding the water resources research and technology institutes established under that Act.
Water Resources Development

A bill to amend the Older Americans Act of 1965 to provide social service agencies with the resources to provide services to meet the urgent needs of Holocaust survivors to age in place with dignity, comfort, security, and quality of life.
Social Welfare

A bill to waive participant fees on small-dollar and veteran Express loans in the largest loan program of the Small Business Administration to close the capital gap for underserved business owners, and for other purposes.
Commerce

A bill to amend the Workforce Innovation and Opportunity Act to provide grants to States for summer employment programs for youth.
Labor and Employment

A resolution commemorating the life of Luis Alejandro 'Alex' Villamayor and calling for justice and accountability.
International Affairs

A bill to authorize the United States Fish and Wildlife Service to seek compensation for injuries to trust resources and to use funds received as that compensation to restore, replace, or acquire equivalent resources, and for other purposes.
Public Lands and Natural Resources

A bill to provide for the treatment of a pharmacy counter refusal as a coverage determination under Medicare part D.
Health

A bill to prohibit deceptive practices in Federal elections.
Government Operations and Politics

A bill to improve the understanding of, and promote access to treatment for, chronic kidney disease, and for other purposes.
Health