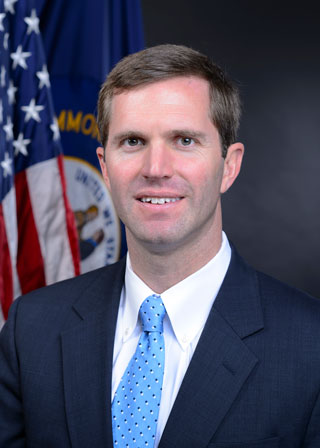 Andy Beshear is a dedicated father, a fighter for justice, and a champion for Kentuckians who have been attacked, silenced, and ignored. Born in central Kentucky, and raised with the values of family, faith, and hard work, Andy understands the challenges facing the Commonwealth. As a proud product of Kentucky’s public schools, Andy knows that a quality education and talented, invested teachers can put Kentucky’s children, and our economy, on the road to success. He is committed to public education and will ensure our schools provide a world class education for each Kentucky child, and a guaranteed, solid retirement for our teachers. As Attorney General, Andy has fought tirelessly for Kentucky families. He has fought against the opioid epidemic by suing opioid manufacturers and distributors that have flooded our communities with pills, creating the Kentucky Opioid Disposal Program, and going after rogue doctors and drug traffickers. Andy has been an independent voice as attorney general, always striving to do the right thing for Kentucky families. He has fought to uphold Kentucky’s constitution and laws, even in the face of opposition from the governor and general assembly. Andy believes in a Kentucky where our families and children have better opportunities for success and a real path to prosperity. He understands that Kentucky families are not getting ahead, with wages staying stagnant while monthly bills go up every year. Andy also knows that state government is simply not working for the people. It operates in secret, and refuses to do the will of the people. He has pushed for transparency as Attorney General and believes that Kentucky should pass term limits for all public officials. As Governor, Andy will fight for education, well-paying jobs, and transparent and inclusive state government. Andy and his wife, Britainy, have two young children, Will and Lila. His family attends Beargrass Christian Church, where both Andy and Britainy serve as deacons.